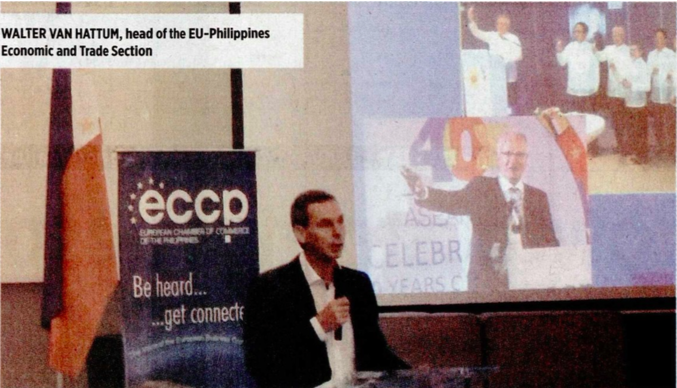 EU encouraging use of GSP+ to boost inclusivity

DAVAO CITY ­ - The Philippines should fully utilize the General­ized Scheme of Preferences Plus (GSP+) privileges granted by the European Union (EU) to enhance inclusive development, an EU of­ficial said.

"What we want to do with our trade and commercial relationship is to help these people to be part of this growth, farmers, small busi­ness people... How we can make the world growth work for those people as well," Walter van Hat­tum, head of the EU­ Philippines Economic and Trade Section, said yesterday at the Mindanao Busi­ness Briefing at the Seda Abreeza here organized by the European Chamber of Commerce of the Philippines (ECCP).

Mr. Van Hattum cited agricul­tural products from Mindanaoas among the commodities thatstand to benefit from increased exports to the EU.

"Fruits, chocolates. Cacao —the European Union buys up 50% of the (global) production of this produce... this has zero tariff un­der the GSP+," he said.

Philippine exports to the EU in 2017 stood at €2 billion, up 31%, the Department of Trade and In­dustry reported earlier this week.

In the first half of 2017, the EU was the Philippines' second­ largest export market accounting for 15% of total outbound goods, next to Japan with a 17% share. The totals for the US and Chinawere 15% and 11% respectively, the Philippine Statistics Author­ ity said. "We really want to live up to that (the second ranking), we are here to do business," ECCP Executive Director Florian Got­tein said at the forum.

Mr. Van Hattum also noted that the European economy has been on the rebound, making it an ideal export market as well as a trading partner. "The European Union is very bullish as the moment... The crisis is definitely over... ifs a good place to do busi­ ness with, whether you want to invest in Europe, whether you want European investors to come to the Philippines, or simply from a trading point of view."

Mr. Gottein also pointed out that the EU, with its 28 member­nations with 508 million inhab­itants, presents a "huge market waiting" for more Philippine products.

In terms of European invest­ments into the country, Mr. Got­tein acknowledged that there is a need for a stronger campaign to bring businesses into the regions, particularly in Mindanao, where "unfortunately, the perceptionstill is, it's a 'no go' area."

"We are here to bring more investments, not only to Manila, but to regions, and also to bring more Filipino (businesses) to Europe," he said.

The ECCP is currently working on a business guide that will focus on the regions, especially those in the country's central and southern parts.

"We want to break it down to the regions... we highlight the Visayas, and we highlight Mindanao... to show what are the opportunities here, not just the Philippines in general," Mr. Gottein said.

At the same Mr. Madrigal em­ phasized that the problem of insur­ gency is "multidimensional" that needs "multi­stakeholder" partici­ pation, including the investors.

Mr. Van Hattum said the EU's international trade agenda to­day is based on such principles as sustainable development, which in part addresses the roots of insurgency.

He said, "We don't just want to have trade just for economic progress, we want to have trade to make sure that the poor people also become better off... and I think that is a lot similar to the current inclusive growth agenda of the Philippines."

This article was originally published on January 25, 2018 on BusinesssWorldOnline.com»