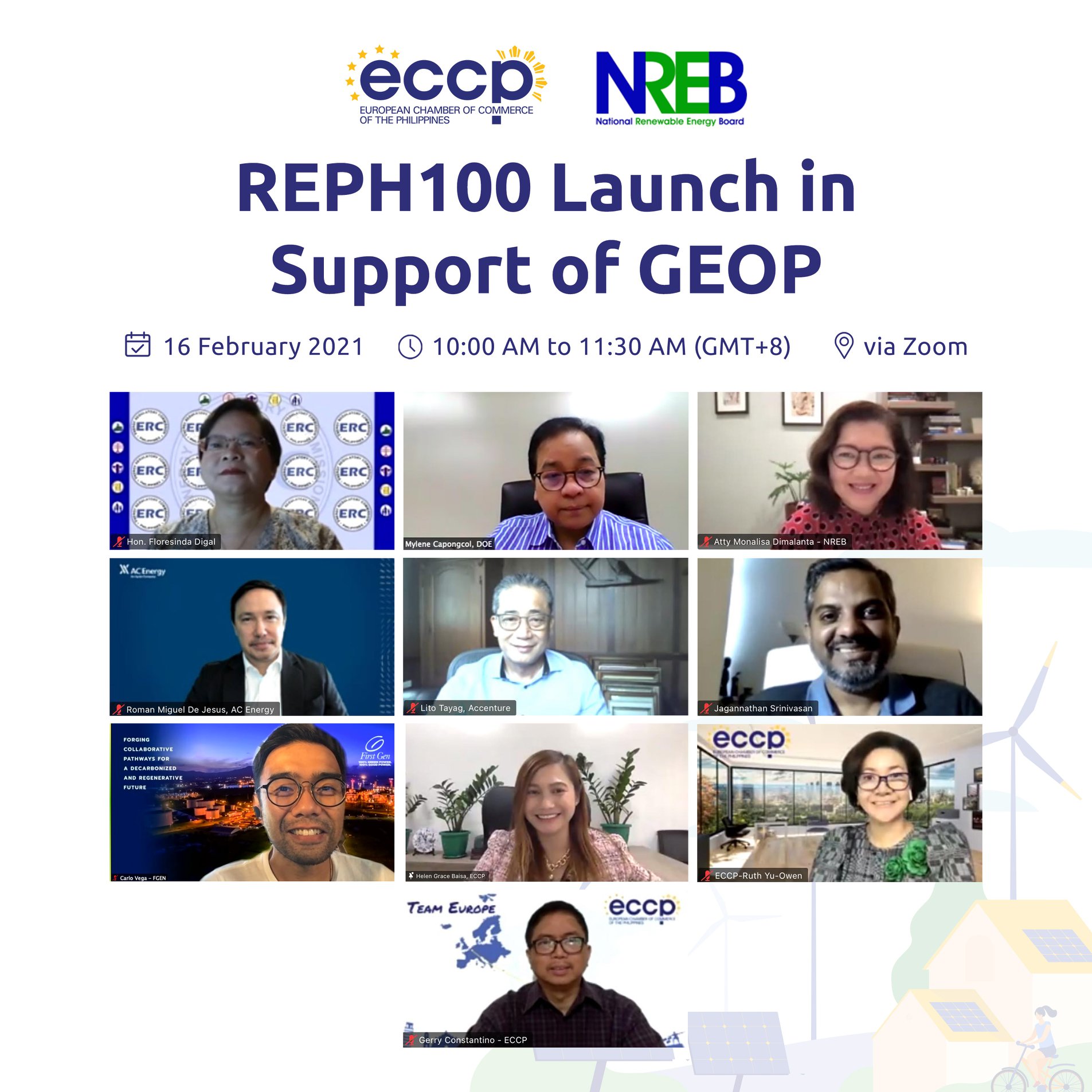 Last 16 February, various energy stakeholders from the public and private sector, academe, business organizations convened for the REPH100 Launch led by the National Renewable Energy Board and the European Chamber of Commerce of the Philippines.

Inspired by the global RE100 initiative, the REPH100 movement is a private sector-driven effort aimed to support the Green Energy Option Program implemented by the Department of Energy. It adopts a whole-of-society approach to fueling the Philippine energy transition for more inclusive economic recovery.

For the National Renewable Energy Board Chairperson Monalisa Dimalanta, REPH100 took inspiration from the RE100 global initiative, to encourage and support local players as well as international players with local presence of various sizes (i.e. small, medium and large enterprises) to shift to 100% renewable energy.

Meanwhile, DOE Renewable Energy Management Bureau Director Mylene Capongcol recognized this step as an important partnership and innovative approach towards "more resilient, reliable and sustainable energy services for the country,” as the agency implements the Renewable Energy Act of 2008 (Republic Act No. 9513) and Energy Efficiency and Conservation Act (RA No. 11285).

Energy Regulatory Commission (ERC) Commissioner Floresinda Digal was also present to extend support to such efforts that harness and optimize the country’s renewable sources of energy. Digal conveyed her hope that the “REPH100 movement launch will further strengthen the collaboration between and among all stakeholders and eventually bring positive results towards achieving a successful energy transition.” As the regulator of the electric power industry, the ERC has also shared their next steps on several mechanisms including net metering for off-grid, distributed energy resources rules, GEOP rules, and the Renewable Portfolio Standards or RPS rules.

Private sector representatives also took an active role in the Launch. AC Energy Corporation, First Gen Energy Solutions (FGES), BacMan Geothermal Inc. (BGI) and SN Aboitiz Power, as among the renewable energy suppliers that have been granted GEOP Operating Permits, share the view on the importance of energy producers and consumers strengthening their collaboration. Miguel De Jesus of AC Energy has seen the RE100 initiative transform energy markets across the world and acknowledges the opportunity that lies within the REPH100 movement. FGES’ Carlo Vega meanwhile underscored how REPH100’s support for RE via the GEOP is in line with the company’s aspiration of progressing towards a collaborative and regenerative future. Representing SN Aboitiz Power, Berwyn Rey Diño reaffirmed the company’s commitment to renewable and responsible energy in powering stronger communities and a greener nation.

From the consumers’ end, several RE100 companies that are represented in the ECCP membership took part by sharing their progress on achieving 100% renewable energy in their global and local operations:

Marking the milestone initiative, the NREB and ECCP signed a cooperation framework agreement, which outlines the groups’ commitment to collaborating on creating awareness on the opportunities and benefits of pursuing a 100% renewable energy powered business and government operations and its impact on climate change mitigation; providing avenue for strengthened consultations with as well as training and capacity building of enterprises and government agencies towards building a vision, strategy and action towards full RE transformation; and working together to expand enterprise and stakeholder engagement in the REPH100 program.

The global RE100 is an initiative by the Climate Group and CDP, which brings together the world’s most influential businesses committed to 100% Re power across their global operations. The group of almost 300 companies have a total revenue of over USD6.6 trillion.

For more information on the REPH100 Initiative, reach out to: Katt Baligod, ECCP (katt.baligod@eccp.com); and the NREB Technical Secretariat (techsec.nreb@gmail.com)