Luzon in ‘state of calamity’ 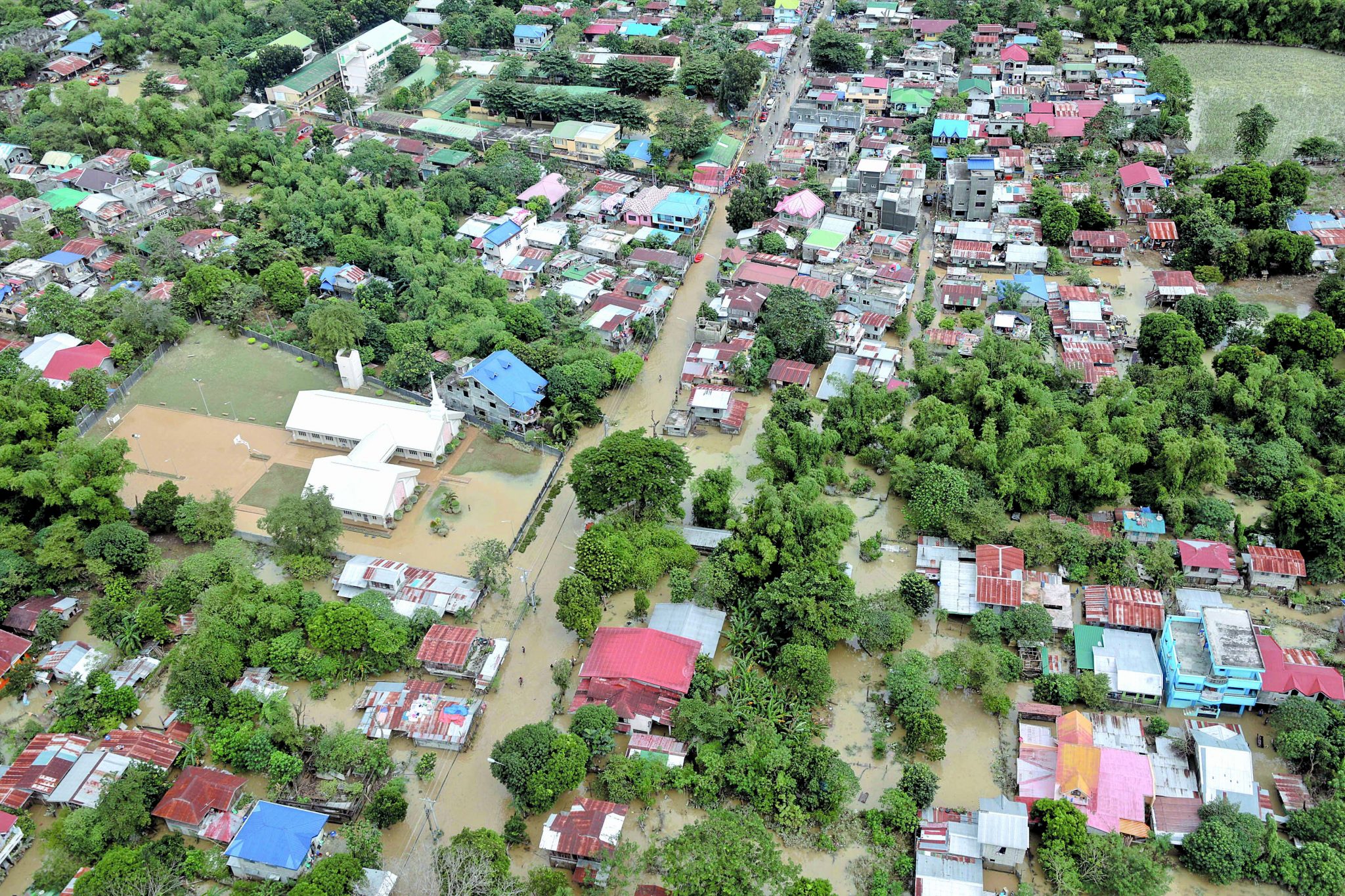 Devastation from the trio of strong typhoons that battered Luzon in the last three weeks has prompted the National Disaster Risk Reduction and Management Council (NDRRMC) to recommend the declaration of a state of calamity for the rest of the major island.

This also sparked President Rodrigo Duterte to order the creation of a task force dedicated to disaster preparedness and post-calamity efforts in the absence of the still to be formed Department of Disaster Resilience (DDR).

Killer typhoons
The NDRRMC on Monday cited its collated data showing more than 100 deaths from tropical cyclone “Quinta” (International name: Molave), which struck the Philippines from Palau with five landfalls on 25 October; super typhoon “Rolly” (Goni), which entered the country’s land mass as the strongest Category 5 cyclone on 31 October; and typhoon “Ulysses” (Vamco) — the country’s 21st tropical cyclone this year, which unleashed its wrath and triggered flooding in Metro Manila, CALABARZON (Cavite, Laguna, Batangas, Rizal and Quezon) and Central Luzon on 11 November.

Eight typhoons have made landfalls in the Philippines since September, 2020 being a La Niña year.

A meeting by the Council on Monday, led by NDRRMC chairperson Delfin Lorenzana, also assessed total damage to property, fisheries and agriculture at around P25 billion.

Its recommendation to place Luzon in an island-wide state of calamity will be submitted to President Duterte. This comes 10 days since the same body also proposed that the Bicol Region, CALABARZON and MIMAROPA be placed under a state of calamity due to the double-whammy these places received from “Quinta” and “Rolly.”

Records compiled by the Council showed 52 deaths and some P22 billion in damage from “Quinta” and “Rolly.”

Almost these same areas were again hit by “Ulysses,” resulting in 69 deaths and close to P2 billion in damage. The Office of Civil Defense (OCD) said there could be more deaths caused by the last cyclone once all reports are collated.

A technical working group, the NDRRMC said, will be convened to discuss preparations, mitigation and preparedness to assess the capabilities of the current dam management following the deadly flood that submerged whole communities in the provinces of Cagayan and Isabela.

‘Build Back Better’
The President tried to fast-track rehabilitation projects in typhoon-hit areas, which Malacañang said can be done through an Executive Order (EO) creating the task force that will look at disaster preparedness and post-calamity efforts.

Presidential spokesperson Secretary Harry Roque said the body to be known as the “Build Back Better Task Force” will be headed by Executive Secretary Salvador Medialdea.

“This body will have a clear chain of command and a direct mandate to address and monitor the multifarious issues and concerns involved in the rehabilitation and recovery phase of typhoon-affected areas,” Roque added.

He also said the task force will focus on rehabilitation of typhoon-hit areas and turning them into “more resilient” communities, as he noted that the Philippines is hit by an average of 20 typhoons annually.

The formation of the task force was met with criticisms and doubts since it will mirror the functions of the NDRRMC.

Administered by the OCD, the NDRRMC is responsible for ensuring the protection and welfare of the public during disasters or emergencies.

In his briefing, Roque justified the formation of the new task force, saying this will “stress that someone has to be in charge” of disaster preparedness and relief efforts.

“What the President is saying is even without the meeting of the Council (NDRRMC), the executive secretary can already make a decision,” he said. “I guess the task force really is to stress that someone has to be in charge. And the person in charge is the Executive Secretary with the full assistance of the Cabinet.”

Roque also noted that with Medialdea at the helm of the task force, government funds can easily be disbursed to post-typhoon projects.

He also said that the NDRRMC is “insufficient” even as he lauded the efforts of Civil Defense Administrator Ricardo Jalad, who also serves as the council’s Executive Director.

“The real solution there is to create the Department of Disaster Resilience. But this remains pending. So, obviously, the Council is still insufficient even if we have a very competent and outstanding executive director Undersecretary Jalad,” he said.

Roque also appealed to the public. “Let’s give it a chance. Let’s see what kind of a difference this EO will make us deliver quick responses to calamity-stricken areas,” he said.

If the Palace pushes through with the creation of the special body, it will be Duterte’s sixth task force this year.

The “Build Back Better Task Force” will follow task forces on campaign against zero hunger, animal-borne diseases, the coronavirus pandemic, corruption on PhilHealth and the expanded task force probing corruption on all government agencies.

The budget of those task forces is usually sourced from outlays of member agencies.

During his briefing in Camarines Sur on Sunday, the President admitted that he shuns “councils” or “committees” for special projects, saying they impede policy-making since consensus should be reached.

He openly declared that he prefers to designate a point person to a specific task who will be accountable to the government project.

Senator Christopher Lawrence “Bong” Go, the former Special Assistant to the President, welcomed the task force, saying it will suffice in the absence of a DDR, which he wants created by passing a bill in the Senate.

Go was with Duterte during an aerial inspection of typhoon-damaged areas in Enrile, Iguig and Solana in Cagayan on Sunday.

Saving face
Blamed for the Cayagan and Isabela flooding, the Department of Environment and Natural Resources (DENR), meanwhile, claimed to have implemented a number of interventions that would have prevented or lessen flooding in Region 2.

Agency spokesperson Undersecretary Jonas Leones said that aside from dredging the Cagayan River and planting some 200 million tree seedlings on low-lying agricultural areas in Cagayan, the DENR will again intensify information campaign against converting forests to agricultural land.

Leones added that the tight enforcement of environmental laws especially against illegal logging will also be conducted by the department.

The region is hub of illegal logging and mining in the northeastern parts of the Luzon.

Leones also assured that no forest land will be destroyed once the construction of the Kaliwa Dam starts.

What’s the cost?
Finance Secretary Carlos Dominguez III, meanwhile, said the agency is still evaluating the need to increase the government’s budget to help the country recuperate from the onslaught.

“We are in the process of evaluating the damage of the series of typhoons and the amounts required to address these and will determine whether or not the current budget will be sufficient,” Dominguez told finance reporters through Viber.

Acting Socioeconomic Planning Secretary Karl Kendrick Chua earlier said that the recent weather disturbances will definitely have an impact on the country’s overall gross domestic product (GDP), which will be discussed in the next Development Budget Coordination Committee meeting.

“This year in the fourth quarter, we saw four typhoons, two of them are rather strong so they will have an impact on GDP. Typhoons are recurring events which we have internalized in our estimates,” Chua said.

“Our GDP is almost P18 trillion so if we put them all together, the impact on the country’s growth rate, preliminary, is around a reduction of 0.05 percentage points, so I think this is a manageable level,” he explained.

Business groups speak
Various business organizations in the country, on the other hand, asked the government to act firmly in implementing extensive disaster-prevention measures.

In a statement released by the Management Association of the Philippines (MAP) and backed by several entrepreneurial associations in the country, it expressed serious concerns about the state of the country’s disaster preparedness.

“But even as we express this concern, we urge our countrymen to move forward in a coordinated and efficient fashion to mitigate the ill-effects of the recent typhoons, and prevent further loss of life and damage to property and the economy,” the MAP statement read.

“We call on the whole country to address the Environment and Climate Change which have accelerated the frequency of disasters, including destructive earthquakes, devastating typhoons, massive floods, catastrophic volcanic eruptions, and ravaging landslides,” the business group insisted.

The group also commended its member-companies and other private sector organizations for responding anew in real time to the immediate needs of those affected by the recent typhoons.

“We take special note that those initiatives are a concrete implementation of the Covenant for Shared Prosperity which our organizations have recently signed with the Management Association of the Philippines. Let us all continue doing our share in helping our disaster-stricken countrymen rise above their unfortunate situation,” MAP stated.