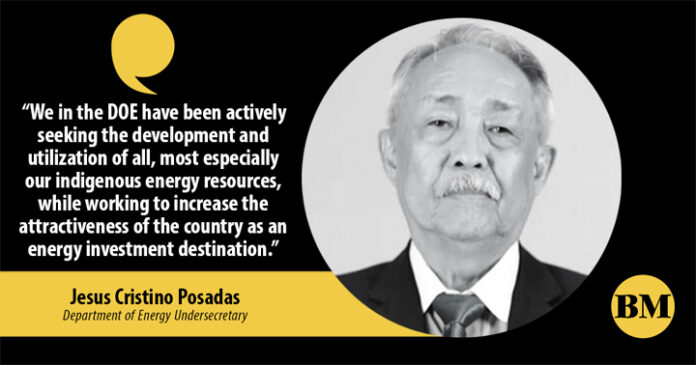 THE Philippines is ready to run the race toward the transition to cleaner and more sustainable energy production and distribution, with experts and industry stakeholders agreeing that there must be a decent mix of renewables and other energy sources to meet the needs of Filipinos and electrify millions more households in the future.

Department of Energy (DOE) Undersecretary Jesus Cristino Posadas said his group is strongly pushing for the development of renewable energy (RE) sources and low- and no-carbon sources like natural gas, hydrogen and nuclear to create a cleaner, more sustainable future for the Philippines.

“We in the DOE have been actively seeking the development and utilization of all, most especially our indigenous energy resources, while working to increase the attractiveness of the country as an energy investment destination,” Posadas said in the Philippine Energy Transition Forum organized by the European Chamber of Commerce of the Philippines (ECCP).

Philippine Energy Independence Council President Don Paulino added that the Philippines is ready for the transition to a clean energy system, especially now that many groups are exploring and developing other sources of energy like natural gas.

“The Philippines has the majority of the elements to transition to a clean energy system,” he said, noting that there are five elements that a country needs to move forward and be innovative.

“Transitioning to RE is quite expensive and a lot of effort is involved. We have to be able to align with one another in such a way that the whole value chain is seamless, complementary, and helpful to one another to allow us to transition,” he said.

Paulino stressed that the Philippines must “operationalize policies and infrastructure and systems” in order to move forward with the transition.

For First Gen Corp. EVP Jon Russell, it is high time for the Philippines to cut its carbon emissions through cleaner energy sources. First Gen is a leading company in energy production through liquefied natural gas.

“The Philippines has a strong reason in wanting to cut emissions in itself. The Philippines is the fourth on the list of countries that nobody wants to be on in 2018,” he said. “Although challenges clearly remain, the tide remains to be in favor of an energy transition.”

Costs go down in the long run
Despite the urgency, many still find RE to be more expensive than traditional energy sources today.

But according to Posadas, RE will become cost-effective in the long run, as the agency implements a competitive selection of entities that will be allowed to develop local resources.

He added that RE will allow more households to be electrified.

According to the Institute for Energy Economics and Financial Analysis, shifting to renewable energy will help provide power to as many as 50 million people, especially in remote areas.

“RE will be cheaper in the long run,” Rozzano Briguez, the president of Philippine National Oil Co. Exploration Corp., agreed.

“This transition is really an all-nation, all-hands-on-deck type of deal. There is so much required from the government, private sector and academe to work really hard to make sure that any roadblocks that are there are taken away and opportunities are opened up for us to truly transition into a sustainable and renewable energy future,” he said.

Senator Sherwin Gatchalian, who heads the Senate Committee on Energy, said lawmakers fully support this shift to renewables, citing 10 pending bills in the House that will ensure a smoother shift toward a cleaner future.

“We need a sustainable transition backed by legislation,” he said.